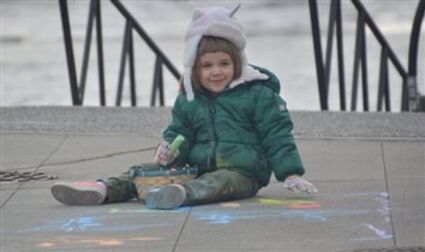 A NEW GENERATION OF ARTISTS DISCOVER LA CONNER – Lenore Micka-Foos, Karl and Brittany’s daughter, was not interviewed Friday. It is not known if the four-year old was pleased with her work, her contemplation of her finished art, or just being at the “Chalk It Up” party on Gilkey Square sponsored by the First on First last Friday afternoon. Story page 6. – Photo by Ken Stern

Given the chilly, overcast and occasionally windy day, our First on First Friday went well. We had nine out of nine reserved chalk boxes taken, which included kids of all ages! Watch out for those Wild, Walking Women of La Conner, “BJ & her Crew.” And we even scored a bonus tip of appreciation from longtime resident Stuart Hutt.

The “Sloughmander” Glen Johnson, showed, sans his second skin costume and chalked up a beautiful Chinook Salmon. He made page three of Saturday’s regional newspaper.

Tragedy befell us Friday as a Rick Dole look alike was apparently murdered on the Gilkey...