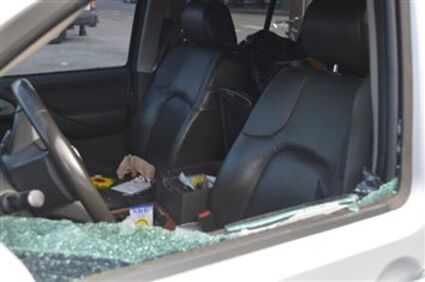 BROKEN WINDOW IS BREAKING NEWS – Mari White-Bucy parked her Nissan Pathfinder near Calico Cupboard on First Street late Wednesday. Thursday she came to this scene: the driver’s window smashed and her glove box and all compartments rifled through. She called the sheriff’s office and the La Conner Weekly News. This is the first of several prowls with a forced entry, said Sgt. Jeff Willard of the Sheriff's Office La Conner Detachment. – Photo by Ken Stern

A La Conner business owner is the victim of a cold case that is just a few hours old.

With temperatures plunging due to a winter blast of cold air, downtown was quiet last night – except for the sound of breaking glass from White-Bucy's vehicle.

Fortunately, White-Bucy believes nothing of value was taken.

But White-Bucy, who owns La Conner Waterfront Day Spa, will need to have her broken window replaced.