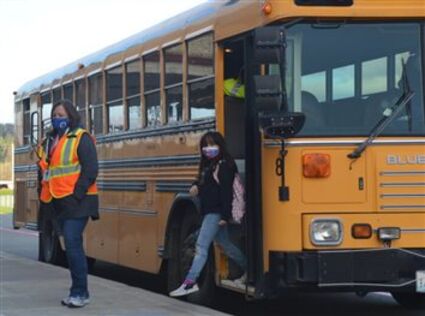 SCHOOL’S IN FOR WINTER – Third grader Sophia Orozco is escorted by Kim Pedroza, transportation supervisor, at the start of the second week of in-class learning Monday. These 90 students, from the Hub, preschool, kindergarten and first grade, will be joined by 40 second and third graders next week. A week later the 40 fourth and fifth grade classes will come to school. More in a future story. – Photo by Ken Stern

La Conner’s was one of three school districts asking for operations funding, with Concrete and Mount Vernon. Mount Vernon voters had a second proposal for safety and technology capital projects....