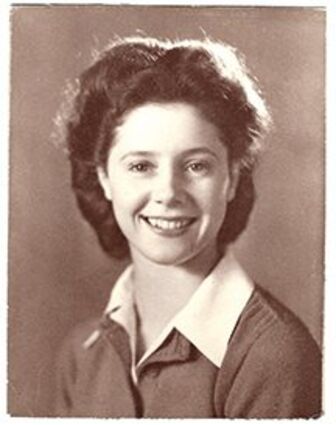 She was much beloved by family and friends, and will be sorely missed.

Her indomitable spirit inspired us all! She was 97 and had hoped to live until her 98th birthday to vote for President-Elect Joe Biden.

She is survived by her sisters Inez (Bud) of Burlington, Washington, and Hallie Jeanne, Wichita, Kansas, and brother Larry (Caroline) Yakutat, Alaska.

Elmyra was predeceased by parents, Lawrence and Kathryn Powell and her brothers James and Kenneth.

After completing business college in Seattle, she returned to Lake Chelan where she met her husband Howard Nelson. Dad saw a beautiful girl walking across the Chelan River Bridge and decided he was going to find a way to meet and marry her. They wed in December 1942. Howard and Elmyra made their first home in Spokane before moving to Lake Forest Park north of Seattle. There they built a house on a hill for their growing family with acreage for a garden, small orchard and a woods behind. Together they created a home where the neighborhood gathered...with badminton court, baseball diamond and plenty of lawn for games and for the kids to mow!

Elmyra loved to sing; her lovely alto added harmony in church choirs for Presbyterian and University Unitarian congregations and to the Keynoters, a Lake Forest Park choral group. She was a member of the Shoreline Library Board and worked to establish a Shoreline Unitarian Fellowship.

After Howard’s retirement and his diagnosis of Parkinson’s Disease, they moved to the Skagit Valley in 1979 to be closer to her mother Kathryn, sister Inez, and daughter Gail. There she was an early volunteer for the Skagit Valley Food Co-op, as well as the Skagit County Mental Health Division’s Older Adult Services where she served as a peer counselor, facilitating Alzheimer/dementia family support groups. She was honored as the 1985 United Way Volunteer of the Year for Skagit County.

In the years following Howard’s death, Elmyra married again to Everett Dalton and later to Fenton Zehner; each pre-deceased her.

Mom was a passionate believer in social justice, demonstrating in support of Planned Parenthood, in opposition to the Coal Train expansion, and marching at age 93 in the 2016 Women’s’ March. She also supported the Skagit Valley Unitarian Fellowship, and loved the weekly discussion group on ethical issues.

Elmyra was a committed environmentalist, birdwatcher, and avid gardener. She installed a roof-top solar array and drip irrigation to conserve energy and water, landscaped with native plants and obtained a National Wildlife Conservation designation for her home in Eaglemont.

The family wishes to thank Sue Mitchell, friend and caregiver in Mom’s final years, who shared her passion for politics and for the environment. A celebration of Elmyra’s life is planned for later in 2021 at the Skagit Unitarian Fellowship, Mt. Vernon. Donations in Elmyra’s memory can be made to the Northwest Harvest (www.northwestharvest.org) and the Environmental Defense Fund (www.edf.org).