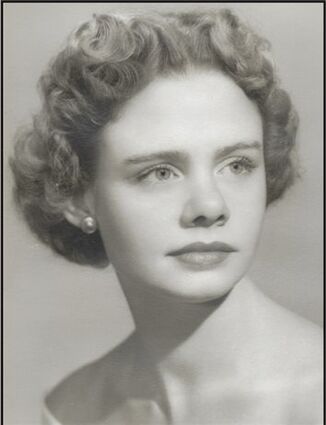 As a young child, Ann went to Catholic boarding school with her sister Jean, and later went to elementary/middle school in Minneapolis. They embraced wintertime and used to skate the river between towns. By high school, Ann was living in Connecticut and graduated from Greenwich High School in 1950. After graduation, Ann attended the University of Connecticut where she was a member of Kappa Alpha Theta sorority and was a Sweetheart of Sigma Chi.

In 1955, Ann met a very handsome pilot on her first flight as a stewardess and they were married six weeks later. In those days, stewardesses could not be married, so Ann changed careers and became a homemaker. They lived in Atlanta, then Miami, and later relocated to the Northeast.

They were finally blessed with a daughter, Wendy, in 1968 and lived on a horse farm in PA where Ann enjoyed taking care of the horses and riding. Four years later, they moved to Grapeview, WA to be closer to Bob’s family and lived there off and on for 27 years. Boating became a fun hobby and many summers were spent going to Power Squadron rendezvous and cruising and exploring Canada and Alaska.

The family relocated to PA for 4 years when Bob was based in NY, and the boat was traded for a plane. Ann enjoyed accompanying Bob to fly-ins and day trips around the area. When Bob retired in 1984, it was time to return to WA, so they upgraded to a larger boat and it became the perfect pastime - Ann could sleep in and Bob could rise early and weigh anchor. In 1999, Ann and Bob relocated to La Conner to be closer to Wendy and her family.

Ann was an active member of the communities she lived in and served on the Grapeview School Board, volunteered with Wendy’s Girl Scout troop, belonged to the United States Power Squadron and Skagit Bay Sail and Power Squadron. She was most recently active in the La Conner Friends of the Library in charge of memberships and volunteered in the Book Nook and the local library Thrift Shop.

Ann was extremely proud and supportive of her grandchildren and spent a lot of time attending the boys’ basketball, baseball, football and soccer games when they lived in La Conner. She also spent a month in Lowell, MI during Andrew’s senior year in 2017 to watch him play football and then returned for several basketball games. She attended Bobby’s 2018 OCS graduation in Newport, RI because it was too important for her to miss. She was especially fond of her youngest grandchild, Abigail, who was able to spend a lot of time with her nana during the summers.

Survivors include her only child, Wendy (Scott) Poulton, of Fort Worth, TX, along with her grandchildren: Bobby (San Diego), Andrew (Pullman, WA) and Abigail (Fort Worth). She is also survived by her brother, Tom Burgoldt, of Nashville, and several nieces and nephews. Ann was preceded in death by both parents; sister, Jean Quick; and husband, Bob Wilder.

Memorial services will be held when it is safe to gather. Remembrances can be made to La Conner Library Foundation, PO Box 1025, La Conner, WA 98257.

Please send your condolences and share memories of Ann to her family online at www.kernfuneralhome.com. Arrangements are through Kern Funeral Home, Mount Vernon.