Electricity restored as late as Saturday from Jan. 26 storm 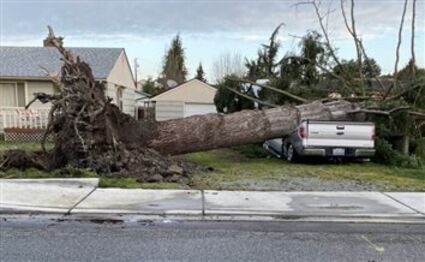 LOCATION, LOCATION, LOCATION – Jim White will get a claim for his 2014 Ford pickup being totaled. He was wondering when to replace it. Timing is everything. Last Thursday he was taking his chainsaw to the roots of the Douglas fir in front of his house at 503 State Street. It blew over in the Wednesday, Jan. 13 storm. See more windstorm pictures on page 7. – Photo courtesy of Rick Dole

It is often said that an ill wind blows no good.

That being the case, the storm that blew through here last week was plenty sick.

Fierce winds downed trees and power lines, caused major property damage, and left some residents in the La Conner area without electricity for up to four days.

A Ford pickup parked at Jim White’s State Street residence was totaled by a fallen tree. A large Douglas fir blew over near the community kitchen in Pioneer Park, which had sustained structural damage in November. The Town Public Wor...