Town cashes in on cell tower extension atop Pioneer Park 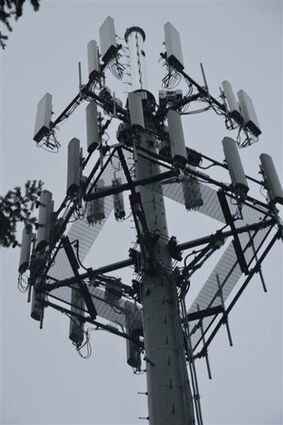 NO BRIGHT LIGHT ON THIS GRAY DAY – Some might call it Excalibur, the 20 foot extension on the cell tower on the hill in Pioneer Park. Folks have reported it gleams and shines when the late afternoon sun hits it. Not this week. – Photo by Ken Stern

But another new look, atop Pioneer Park, is intended to refract rather than transmit light.

It is the 20-foot extension of the Crown Castle Cell Tower, put in place last month – like the lights on the bridge – but fitted with a special camouflage film that allows it and attached antennas to mimic the sky and blend in with the surrounding area.

There are, however, late afternoons this time of year when lighting conditions are aligned such that the tower extension is momentarily aglow from th...