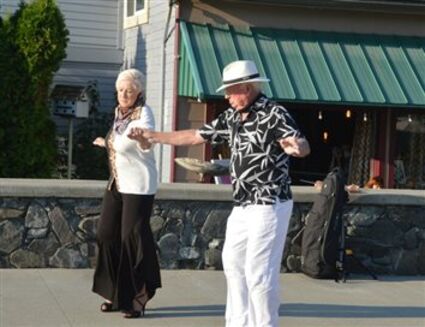 DANCING IN THE LIGHT OF THE DAY – Sunlight, moonlight, Christmas tree lights. Jeri (left) and Jerry Kaufman will dance as long as they have enough light to look into each other’s eyes. They came out to celebrate the first “First on First” the Friday before Labor Day, when this photo was taken. – Photo by Ken Stern

They love classic cars, but when Jerry and Jeri Kaufman of Burlington go for a spin it is just as likely to be on the dance floor.

The couple’s love of dancing, apparent to all during La Conner Live summer Sunday concerts at Gilkey Square, will be featured on an “Eric’s Heroes” segment airing tonight (Wednesday) as part of the KOMO-4 6 p.m. newscast.

Those in Seattle who have previewed the profile say it’s much-watch TV.

No surprise here, where the Kaufmans are much admired for their rare zest for life and tireless devotion to public service.