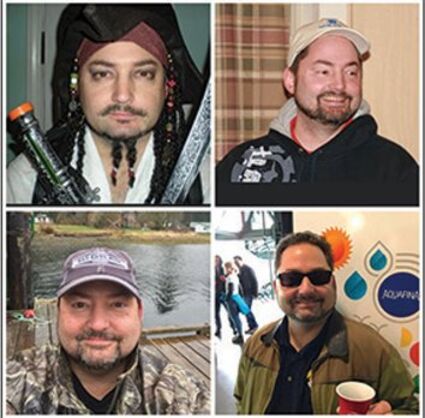 Burke Russell Hagen (49) of Seattle, Washington passed away at his home on the morning of November 9, 2020, due to natural causes.

Burke and his twin brother Jerrod arrived in Palmer, earlier than expected, on a cold Alaskan night 49 years ago to parents Patricia (Engel) Hagen and Erling Hagen. Their older sister Deena, became a second mother to these boys and another, Scott, born 13 months later.

After his family moved to Bayview, Washington in 1977, Burke attended West View Elementary and then La Conner High School, graduating in 1989.

He continued his education at Bellevue Community College for Radiology and then started his career at Virginia Mason Medical Center.

Burke was a respected radiology, computerized tomography (CT), and MRI technologist with Virginia Mason Medical Center for nearly three decades, since June of 1992, working heroically on the frontlines throughout the pandemic.

His value was evident in a posting made by Virginia Mason after Burke’s passing, “Over his 28 years of service at Virginia Mason, Burke was a constant friendly face and positive force within the Radiology department and across the organization to the many people with whom he worked, not to mention the tens of thousands of patients he helped over the course of his career.”

Most important in Burke’s life and his biggest love was for his two children, Dante and Samantha. He enjoyed supporting them in their theatre, music, and drama productions. He loved teaching them to play D&D and Magic the Gathering. Camping trips and visits to Disneyland were vacation highlights.

From The Lost City to Emerald City Comic Con, Burke has enjoyed decades of hanging out with friends and family gaming, playing the hero or the villain with equal enthusiasm. Introducing his children to various cons, the joys of gaming, and cosplay, Burke min-maxed his experiences of life like he did his characters, always finding the best path to enjoyment. Who can forget the many costumes, especially his spitting image of Jack Sparrow?

Those who knew Burke best, will remember him for his positivity and his boisterous laughter; always a belly laugh was available. We loved his Christmas sweaters and hats as well as his many Looney Tunes ties and shirts. Burke was always uniquely himself.

Burke had a servant’s heart. He loved to be with people and make them feel comfortable - whether it was working with patients at the hospital, going on church mission trips to Mexico assisting with building homes, organizing meals at his church or playing games with friends. Every summer the family would go to Vancouver Island to spend a week working and playing at Esperanza Ministries - a ministry that serves the First Nations people of northwest Vancouver Island. Lasting friendships were made on the annual trips and it became a place dear to Burke’s heart.

Burke was preceded in death by both his parents, Erling and Patricia Hagen, his maternal grandparents, Earl and Evelyn Engel and cousin Roger Engel; his paternal grandparents Anton and Olga Hagen, three uncles Ray, Kenny and Tony Hagen and two aunts, Gladys and Alice Hagen.

He is survived and will be sorely missed by his children Dante and Samantha, his former wife Cindy Hagen and his siblings, twin brother Jerrod (Rhea), niece Kayla and nephew Cole; sister Deena (Bob), twin nephews Cameron and Austin; brother Scott (Kremena), nieces Julianna and Grace, and nephew Benjamin.

Burke grew up close to his cousins both in Alaska and Washington. He would want them mentioned as well. He is survived by his Hiller cousins, Jason, Kyle, and Ryan and the Engel cousins, Leslie, Cindi, Kelly, and Jamie. His maternal aunt Judy Taipale and Uncle Jerry Engel, maternal in-law aunts and uncles, Leslie, Ted, Debbie, and Ray, Paternal Aunt Alisha and Hagen cousins Lourdes, Tony, and Aaron. The next two generations are too numerous to include.

During these uncertain times and COVID restrictions, a celebration to honor Burke will be held in the future when the time is right.

In lieu of flowers, memorial donations may be made at EsperanzaMinistries.com.