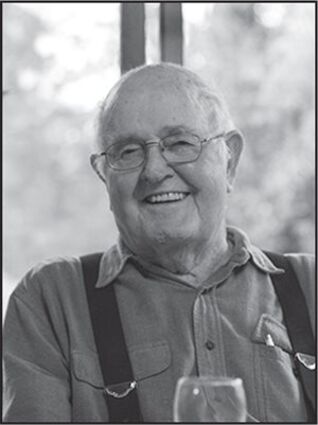 Born in Stockton, CA October 2, 1921 to Aida Kunze Hubbard and Marvin Thomas Hubbard. Died in Island Hospital, Anacortes, WA, October 15, 2020 soon after celebrating his 99th birthday. He had an older sister Jeannne (Garrison) who predeceased him.

The family moved to Sacramento when Jack was 7. Their resourcefulness, sheer grit and a big garden pulled them through the Great Depression years. In his teens he was passionate about fishing in the river, shooting ducks with his buddies and skiing with salvaged equipment in the Sierras. He also enjoyed creating wood carvings and clay sculptures. His mother was a potter.

In 1941 Jack, with some buddies, joined the California National Guard for a 1-year hitch, but after the Pearl Harbor attack, he found himself inducted into the U.S. Army Field Artillery. Then he was accepted for pilot training in the Army Air Corps and was disappointed when he failed the crucial flying test. This may well have saved him from the many pilot losses in 1943. After long detours through duties in Texas and Oklahoma, he finally qualified as a Tail Gunner in B17s.

Arriving in England in January 1945 he flew in some of the last raids of the war in Europe with the 9th Bomb Group, stationed in Rougham, Suffolk. While awaiting his return home he dropped in to a dance at his Sergeants’ club to relax by a blazing fire on a cold October night. A shivering British WAAF guest came to stand by the fire to get warm. He offered her his seat, she accepted. Her name was Grace Mary Martin. They were married three months later on Christmas Eve of 1945, at the 10th Century Cookham church in Berkshire. Their hasty marriage lasted for nearly 75 eventful years.

In 1946 they moved to the U.S. and both enrolled in the University of California at Berkeley on the GI Bill and lived near his loving, supportive family.

Then the University gave them an apartment in Veterans’ Village Married Student Housing in Richmond. In this stimulating community of their contemporaries they made many lively lifelong friends. His son, Michael (Stephen) Thomas Hubbard was born in May of 1948. While Jack was working for his degree in Economics, he also continued his art, melting his fishing weights on the kitchen stove to make lead sculptures and developing his interest in photography, even creating his own darkroom under the stairs. Later he created elaborate fish themed mobiles.

The family moved to Sacramento after Jack’s graduation.

His son Peter Carl Hubbard was born in October of 1951.

For the next twenty five years Jack worked for the State of California in Personnel, mostly for the Department of Mental Hygiene in Sacramento with five years as Personnel Officer, helping with progressive reforms at Mendocino State hospital.

He made vigorous efforts to recruit and hire the first African American physician, Ralph Kennedy at the hospital, creating a policy of non-discrimination, which attracted many other qualified Black professionals.

Those were his happiest work years and also a wonderful setting for his passions: fishing for steelhead and salmon with good friends, deer hunting in the hills, scuba diving for abalone on the coast.

A promotion brought the family back to Sacramento in 1962. Jack introduced the boys and Grace to skiing. They took many day trips to the ski slopes and spent a memorable holiday snow bound in the Squaw Valley parking lot in their 20 foot trailer. It was an adventure. Jack took Michael with him on scuba diving adventures and Peter became an expert fisherman. He resonated with his teenage sons when they became active in the Vietnam War resistance and the hippie counterculture, though he encouraged them to continue their education. He began to dream of “ doing his own thing.”

By 1970 his parents had passed away and his sons were in college and already married. His work became dispiriting, many mental patients left lost and untreated on the streets. As a distraction, he built a boat in his garage, a 12 foot Pelican. When it was finished he and Grace learned to sail and in 1972 trailed their boat north to Samish Island to join boat builder Fred Smith’s annual camping cruise around the San Juan Islands. The adventure, the beauty and the companionship of the fifteen other sailors, changed their lives and ambitions.

Now it was a question of how to manage early retirement to Puget Sound.

Jack had the great idea of building a bigger boat they could live on.

While he and Grace kept working he bought a fiberglass Faralon 29 foot hull, to finish and outfit in his backyard.

In the summer of 1977 they both retired, sold the house, headed north and started a new life.

Their sailboat, now named Crane, was trucked to Olympia for rigging and they sailed her to Samish Island.

They found the marina in Shelter Bay, where they lived aboard for a couple years and docked Crane for 25 years more.

During the summer, they sailed in the San Juans and explored the Canadian Gulf Islands, often taking friends and their growing family on magical vacations.

Winters, they bought, rehabbed and sold old houses in Burlington, and built two houses, one of them their own dream house in Shelter Bay.

This allowed House Exchanges in Canada, Colorado and Ireland.

They eased into La Conner’s uniquely vibrant community of established and aspiring artists, writers, sailors, fisherman, craftsman, business people, Fishtown originals, farm families, church goers, peaceniks, political activists and made friends in Shelter Bay and the Swinomish community across the channel. They made many great friends.

In their new house, they started collecting art. While Grace became involved in the community, Jack created a big garden and developed his cooking skills. His gourmet dishes were prized at home and in frequent potluck parties. Clams and crabs were plentiful and grebes still dived for smelt in the channel. He and Grace took up mushrooming and birdwatching - they helped found Skagit Audubon - cross country skiing and photography. They car-camped to Alaska. They made many trips to Canada and Mexico. They visited Grace’s family and friends in Europe. Their sons had both joined the migration to Washington; they and their families were frequent visitors.

When he finally had to give up boating they bought their first computer and learnt to use it. They also became ardent Bridge players with friends and in the Mount Vernon and Anacortes Bridge clubs. They missed becoming Life Masters by half a gold point before they stopped competing in tournaments. Jack was a proud Democrat. He cast his first vote for Roosevelt in 1940 and his last for Biden in 2020.

As age took its toll, Jack’s life was greatly extended by the marvels of modern medicine. In his last house-bound year he framed and had hung dozens of his photographs - the story of his life and travels with his beloved Grace. He received the best End of Life care surrounded by family at Island hospital in Anacortes.