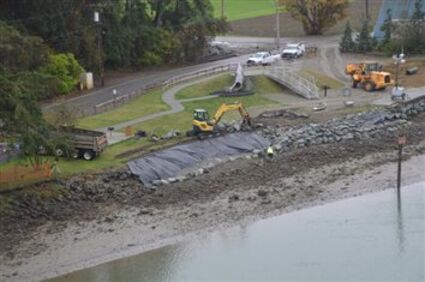 MAKING AN INVESTMENT TO SAVE THE BANK – Work has been underway since mid-October, when this photo was taken from the Rainbow Bridge. The shoreline restoration at Conner Waterfront Park is a major re-armoring of the channel bank. Project costs are $175,000. Given good weather the project will be done before year’s end. Story, page 6. – Photo by Ken Stern

Time and tide wait for no one.

Town officials have long been eager to restore the shoreline at Conner Waterfront Park, They know that adage well.

But for what seemed the longest time they had to remain patient as the proposed major re-armoring of the channel bank beneath Rainbow Bridge slowly waded through a lengthy permit process that was finally concluded earlier this year.

The Town’s patience was rewarded in late October when work crews moved in heavy equipment and large rock to begin stabilizing th...