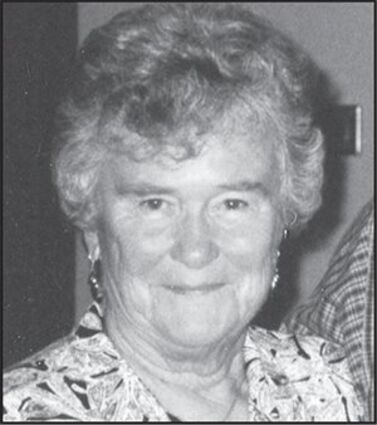 Karla was born January 12, 1935 to Art and Erma Ring in the LaConner “hospital” later occupied by Tillinghast Seed Company.

Karla grew up bossing her older brother John around on a Skagit Flats farm just outside LaConner where she loved working with her dad and his dairy cows.

After graduating from LaConner High School in 1953, she enrolled at Washington State University.

Her college days were short-lived, though, as she had met and fallen in love with Les Lillquist the previous summer.

Karla and Les were married at Salem Lutheran Church in Mt. Vernon in August 1954, thus beginning 58 years of loving marriage.

She and Les made their first home in Coulee City where Karla was soon a mother when Edwin came along in 1955.

Together with Les, she created a loving home for their sons and friends.

Karla was the consummate mother who spent hours cooking and baking for three growing boys.

She was fully supportive of her boys’ activities - from hunting to horses to scouts.

After retirement, she and Les returned to her beloved Skagit Flats where they built a home on the family farm.

Karla was a devout Lutheran.

She was confirmed at Bethel Lutheran Church in Coulee City, and was later a member of Faith Lutheran in Oroville, and Fir-Conway Lutheran in Conway.

She loved the beauty of the world and was able to capture that beauty through art, first with oil painting and later with watercolors.

Karla was as comfortable in the outdoors as in.

To her final days, she loved the feel of the sun on her face.

She enjoyed camping and snow skiing.

She was a wonderful gardener who created beautiful flower beds everywhere she lived.

She loved catching king salmon on the Skagit River and trout at Lost Lake, especially if she caught more and larger fish than Les! Swimming with her grandkids at Banks Lake and Bay View were a highlight as was digging her toes in the sand at Rosario Beach, where she vacationed with her family as a child.

In 2014, Karla was diagnosed with Alzheimer’s disease and eventually moved into a dementia care facility.

Even as her mental and physical capabilities declined she retained her sense of humor and her positive views on life, and was a favorite of the care givers.

Karla is survived by her brother John (Berdean) of Burlington, sons Ed (Jan) of Oroville and Karl (Nancy) of Ellensburg, six grandchildren (Jenny (Ben), Wayne, Kelty, Cade, Erik, and Jensen), two great grandchildren (Colter and Mesa) and many lifelong friends. She was preceded in death by parents Art and Erma, husband Les, and son Vic. Funeral arrangements are being made by Kern Funeral Home in Mount Vernon. Because of the Coronavirus, the family will hold a small, private ceremony at a later date. In lieu of flowers, donations may be made in her memory to Fir-Conway Lutheran Church or Skagitonians to Preserve Farmland.