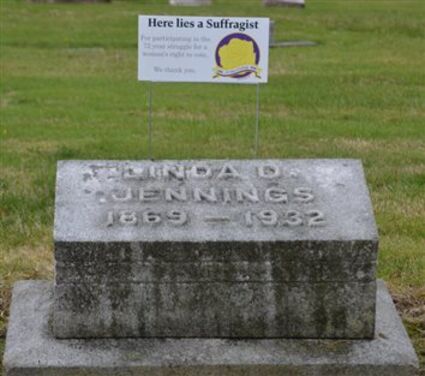 THIS WOMAN CONTRIBUTED TO OUR HISTORY MORE THAN MOST – Linda Linda Deziah Jennings’ work for suffrage helped women in Washington gain the in 1920. If she was well behaved, she still made history. The popular bumper sticker and slogan is “well-behaved women rarely make history.” Visit her at Pleasant Ridge Cemetery. – Photo by Ken Stern

But not as lengthy as the campaign to secure for women the right to vote, a decades-long fight whose leadership ranks in Washington state included the daughter of a pioneer La Conner family.

Linda Deziah Jennings, 1869-1932, is being honored now for her many contributions to the women’s suffrage movement, which ranged from speaking engagements, authorship of persuasive magazine articles and the editing of a thematic cook book whose popular recipes shared pages with voting rights essays.

In observance of the centennial anniversary of passage of the 19th amendment, which granted women in...