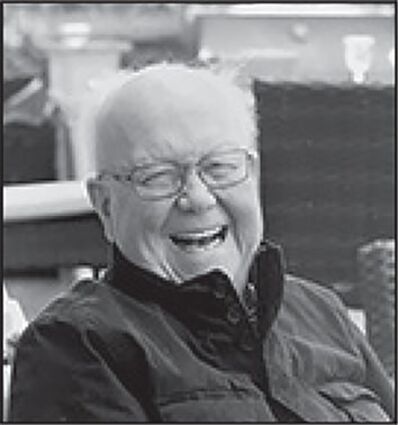 A gentle giant of a man with a heart as big as he was tall, and a warm friend to many, many people, Ron Scott passed away peacefully on September 29th at his home in La Conner, his wife Elizabeth by his side.

With a keen eye for organization and for human nature, Ron enjoyed a long and successful life as an organizational development consultant at the board level of many large companies, as well as an executive coach to individuals at all levels.

Ron excelled at making connections between people and loved nothing better than to put together two people he thought would have some common interest and might be able to help each other. It was said in jest but Ron really did seem to know everyone in the Puget Sound region. Always a thoughtful and trusted mentor, he took real pleasure in seeing someone build on his advice to grow a successful business, and many people benefited from his wisdom.

Born on January 19, 1939, in Toppenish, his formative years were enlivened and shaped by the values of the Yakama tribe. Their core themes of integrity, loyalty and honor formed the solid basis of his life. In 9th grade his family moved into Yakima; he was in the last graduating class of North Yakima High School, participating in both varsity basketball and baseball while serving as student body president. He graduated from Washington State University with a Bachelor’s degree in Business Administration, and later achieved a Master’s in Organization Development from Central Washington University.

He built a business career starting in sales leadership at Xerox, where he championed the careers of women in the sales force. Moving to out-placement specialists at Drake Beam Morin, his skills helped many people transition into new careers (check with DBM colleagues), and then parlayed his business and OD experience to build his own consulting practice. A highlight of his career was being asked to help the African National Congress with its organization as the Republic of South Africa transitioned to the post-apartheid Mandela era.

His generosity was both widespread and discreet. He would help individuals with immediate challenges, as well as making significant donations to causes such as research into bipolar disorder, which had afflicted several members of his immediate family.

Ron’s many interests included movies – he was once mistaken for a newspaper reviewer given how many movies he attended during the Seattle Film Festival – as well as reading, his beloved Mariners (he always had season tickets) and above all fly fishing. The pursuit of trout took him across the world, from the mountain streams of Montana with Elizabeth, to Patagonia and New Zealand. His meticulous organization was legendary, as witness his immaculate and art-filled apartment in Edmonds; his Christmas cards were always the first to arrive, on the day after Thanksgiving.

Ron married Elizabeth Larson Scott, the love of his life, in 2005, and her family immediately became his own, filling a long-felt gap in his life. He loved being with them, always there for them as a steadying influence and source of sage advice. The grandchildren called him Gramps; the young ones truly enjoyed climbing all over him, and the older ones appreciated his stimulating conversation and thoughtful questions. He is survived by his wife Elizabeth, children: Laura, George and Megan (Thompson Lykes), and five grandchildren: Mason, Palmer, Charlie, Faith, and Cutter.

A big man who has left a big impact on many, many lives, Ron will be sorely missed. His funeral will be private, with a celebration of life held next year when circumstances permit. In lieu of flowers, donations would be welcome to The Ryder Charitable Foundation or the National Organization for Women. Go Mariners!