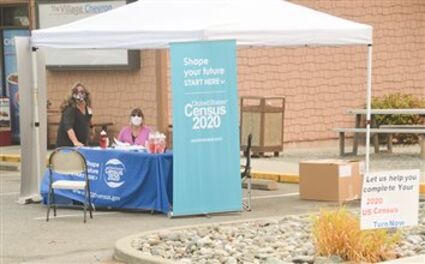 KEEP COUNTING TILL WE ARE ALL COUNTED – Staff from the Census Bureau came to La Conner last Wednesday, setting up at the Swinomish Chevron. Like everything else this year, we can say this has been a census like no other. Like everyone else, the Census Bureau relies on the U.S. Postal Service for getting your mail delivered to it. Brenda Casten, left, and Linda Trotchie-O’Rourke are staff. – Photo by Ken Stern

The countdown is still on.

After having announced in August that it would end its data collection efforts on Sept. 30, the Census Bureau is sprinting to the finish line to complete its constitutional mandate to count all persons living in the U.S.

To that end, a Census team staffed an outdoor counting station at The Village Chevron on the Swinomish Reservation for four hours last Wednesday.

Led by Census Bureau Partnership Specialist Joshua Fliegel, the team was here to connect with local persons who had not yet been contacted during the nearly six months that counting efforts have been u...