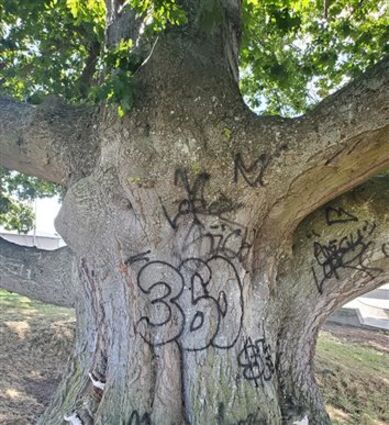 NOT THE HIGHEST OR BEST USE OF A TREE – The vandals who tagged this tree, whether local or out of town, lack respect for this oak, this community and the long human and natural history that nurture both. They have done a bad thing on North Sixth Street, at the end of the school campus and skate park. – Photo by Bill Reynolds

A recent rash of graffiti vandalism in La Conner, where targets have included community hub Maple Hall and a venerable large oak tree, is not so much disturbing for its appearance as it is for who might be responsible.

Willard said the numeral “360” spray-painted on the landmark tree near the skate park off North First Street and the words “Westside Piru” tagged next to Maple Hall reflect gang monikers.