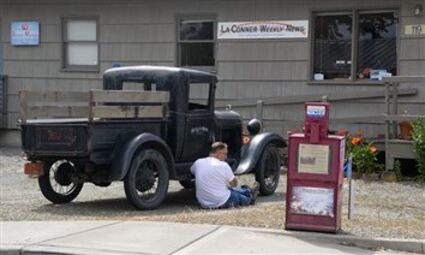 MAKING NEWS AT THE WEEKLY NEWS – Rick Dole drives the “Ghost of Tom Joad,” the car and the metaphor, and is a presence around town. In June he stopped at a certain newspaper’s office. He is taking video, not fixing the car, as the fictional Tom Joad often did on his epic migration to California from Oklahoma. –Photo by Ken Stern

Ghosts may be invisible, but that is not the case in La Conner.

After all, the Ghost of Tom Joad can be seen all over town and on social media.

That thanks to Tillinghast Drive resident Rick Dole, a U.S. Navy veteran who in retirement has launched a project blending his varied interests in auto mechanics, history and photography.

The Ghost of Tom Joad is the name Dole has given his vintage 1928 pickup, a converted Model A “Fordor” sedan, which he keeps in perfect running order for regular photo shoots in the La Conner area.

Dole’s truck is the centerpiece of his Where in La Conner...