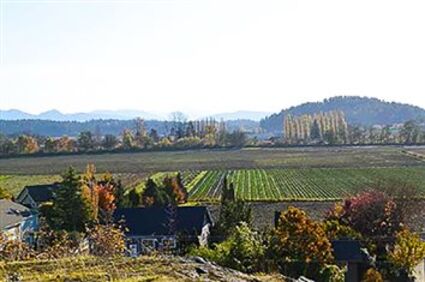 THE VIEW FROM THE TOP – “The Rock,” or “Snapdragon Hill” is an eight lot development owned by Everett developer C.J. Ebert. Permitting is underway. Road and utility construction will come first. – Photo by Ken Stern

La Conner has long been considered one of the most livable communities in the Puget Sound region.

The trick, for an equal length of time, has been to find available housing here.

The commission will hold a video-conferenced public hearing next month on its recommendations that Accessory Dwelling Units (ADUs) in residential areas be deemed allowable rather than conditional uses and that housing restrictions in commercial zones be eased.

“We’re trying to come up with an arsenal of options to make things better to combat the housing issue,” said Town Planner Marianne Manville-Ailles.

“We’ve gotten nothing but positive feedback on that,” Manville-Ailles told commissioners during their Aug. 18 Zoom meeting.

In addition to endorsing the upgrade of ADUs, the commission favors setting aside more space for residential use in commercially zoned buildings.

Manville-Ailles and Mayor Ramon Hayes said last week that those issues would likely be best addressed through code revisions.

“It’s a quicker way to do it,” Manville-Ailles said.

“It’s the cleanest way to do it,” he concurred.

Commissioners also pondered a future reduction of the minimum residential lot size requirement from its present 5,000 square feet. That would be in keeping with a Town goal of increasing local medium-income, market-based housing in La Conner.

“It would be great,” Hayes told the Weekly News, “to have more young families in La Conner.”

Those families, he projected, would contribute significantly to the community’s social fabric and financial health.

Manville-Ailles said there are housing projects now in process on Maple Avenue and roadway access construction for the Snapdragon Hill residential development is slated for early September.

Manville-Ailles said Snapdragon developer C.J. Ebert and his architects are committed to homes that sport a motif reflecting La Conner’s historic character even though the development is outside the Town’s Historic Preservation District.

“The lots aren’t within the HPD,” Manville-Ailles said, “but the architects are adhering to that. They think the best fit is to make minimum changes to the topography, to make all the structures work with the topography.”

“He wants to come in and do something nice,” Hayes added, speaking of Ebert.

Ironically, commissioners suggested COVID-19 might be spurring the present demand for local housing. Persons working for Seattle area firms can now tele-commute from homes here rather than fight daily traffic snarls on I-5, they noted.

With the housing market heating up, Hanneman said there are also signs the business district is rebounding from the virus crisis. An avid walker, Hanneman has seen evidence of recovery as she laps the town.

“I’m seeing a lot of jockeying around,” she said. “There are new businesses coming into town regardless of COVID. The new businesses want to come in and be well-positioned.”

“A lot of stuff is going to be happening in La Conner,” Manville-Ailles said on Thursday. “We’ve passed the number of permits that we had this time last year, and last year was a busy year for us.”