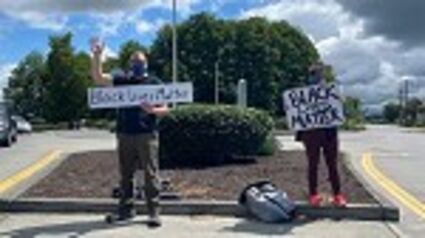 NO MASQUERADE – Peaceful protesters observed social distancing and donned masks when they gathered Sunday morning at the roundabout entrance to La Conner. Despite the facial coverings there was no concealing their cause – bringing public awareness to the ills of racial injustice. – Photo courtesy of Ivan Carlson, III

There were no complaints here about Sunday’s weather.

But there was still reason to protest.

About 20 people gathered with signs and placards for two hours under sunny skies that morning at the roundabout on the east edge of town to join the rest of the world in condemning racial injustice and police misconduct.

The local event was intended to be small and was selectively promoted, primarily by private messages and texting, participants said.

The reaction by passing traffic was mostly positive, they reported.

Attendees were greeted by motorists who honked horns, offered fists of soli...