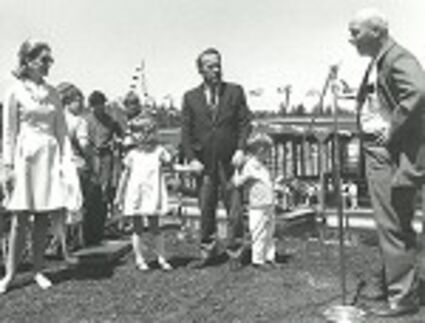 HONORED GUEST – Sen. Henry Jackson (center), later a presidential hopeful, attended the 1970 ribbon cutting ceremony at the Port of Skagit’s La Conner Marina. Jackson made numerous appearances in La Conner over the course of his career. The town was in Jackson’s congressional district when he served in the House of Representatives prior to being elected to the senate.                – Photo courtesy of Port of Skagit

All are gone now.

But 1970 also saw the ribbon cut for launch of a new and key cog in the local economy – one that not only remains but has grown significantly over the past half-century.

The first phase of the Port of Skagit’s La Conner Marina was dedicated in late May that year with a ceremony keynoted by U.S. Sen. Henry Jackson, of Everett, who twice sought the Democratic Party’s presidential nomination.