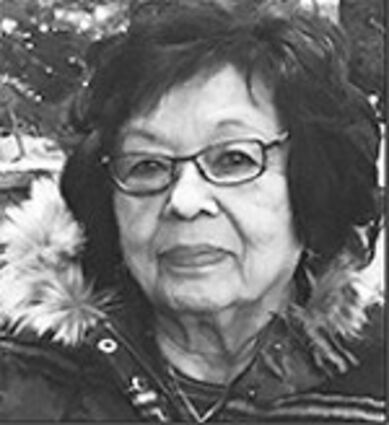 She lived a life filled with prayer, giving, and tradition.

Joan’s teachings from her elders have been passed down to her family and community and will not be forgotten.

Joan grew up alongside the Fraser River in British Columbia, daughter to Joseph Pennier and Jean Pennier (Willoughby) on the old Scowlitz Reserve.

At the young age of 5 she was taken to St. Mary’s Residential Boarding School in Mission, BC. Following her completion she enrolled in nursing school in Vancouver and graduated with a LPN degree.

From there she worked at Essindale Hospital in Port Coquitlam as a nurse.

In the summer of 1958 at the Stommish Water Festival, her love of dancing caught the attention of her future husband Marvin Wilbur Sr.

Soon after, they were married and started a beautiful family and a marriage that has lasted 60 years.

Joan and Marvin got married at St. Mary’s campus in Mission BC in 1960.

She became a US citizen and a Swinomish Tribal member after the start of their marriage. Marvin and Joan built a rewarding life through working hard while understanding the importance of generosity and compassion. Joan pursued many endeavors and had many successes. Through her time on the Swinomish Senate, she oversaw the following developments of the health clinic, dental clinic, housing, addition of the casino, smokehouse, and Spiritual Center at St. Paul’s. Joan contributed to the vision of having a holistic community for the Swinomish people. Joan was a part of many gaming, fishing, and intertribal initiatives.

She was a woman of strong Catholic faith most active with St. Paul’s and St. Mary’s Parishes. She was a self-taught culinary artist and spent countless hours baking, cooking, and canning. One thing she cherished above all was spending time with family. She enjoyed watching her family play competitive sports and other activities, spending time tending to her garden, and sharing home-cooked meals together. Joan will be missed dearly by her family, loved ones, and friends – but her life will never be forgotten.

To offer Joan’s family your condolences and share memories online you may go to www.kernfuneralhome.com.

Funeral arrangements are under the care of Kern Funeral Home.