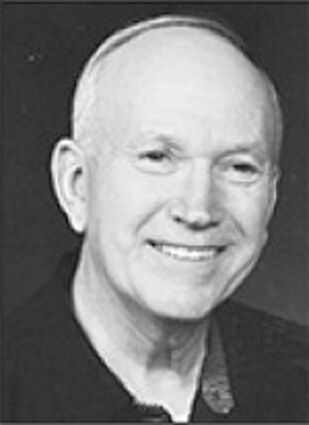 Joseph Wenzel Wohleb, Jr., age 96, a five-year resident of Skagit Valley passed away peacefully on May 7, 2020 in Burlington, WA. He was born on Aug. 6, 1923 in Olympia, WA the youngest son of renowned Olympia architect Joseph Henry Wohleb and Matilda (Gresl) Wohleb.

He graduated from Olympia High School in 1941 and went on to attend the University of Washington when he decided to enlist in 1942.

He proudly served in the U.S. Army Air Corp. during the Second World War as a waist-gunner on a B-17 of the 94th Bomb Group.

He returned to Olympia in 1945 where he met Joy Ann Thompson, a nurse at St. Peter’s Hospital in Olympia.

They married in 1948 and he finished his education, earning a Master’s degree in microbiology from the University of Montana.

The young couple returned to Joe’s hometown of Olympia where he had a long career as a microbiologist for the Washington State Department of Agriculture.

It was in Olympia where Joe and Joy raised seven children.

They were active members of the St. Michael’s Catholic Parish of Olympia.

In 1978, Joe was able to take a long awaited trip to Germany to visit relatives.

Joe and Joy were married almost 66 years before Joy’s passing on December 7, 2014.

Joe enjoyed fishing, rooting for the Seahawks, Huskies, and Mariners, and eating his favorite food, oysters, especially Olympia Oysters. Annual trips to Long Beach, WA were always a highlight. In 2015 Joe moved into Creekside Continuing Care Community in Burlington, WA where he lived until his passing. Joe enjoyed viewing vintage airplanes at the Skagit Regional Airport with his son, Joe and daughter, Mary, going for car rides around the Valley and checking out all the beautiful waterfront parks. He is preceded in death by his father Joseph Henry Wohleb (1958), mother Matilda (1938), brother Robert Wohleb (1966), and brother George (Buddy) Wohleb (1928).

The family is forever grateful for the loving and devoted care their Dad received from the Creekside Community staff and Hospice of the Northwest. Services will be held at a later date. In lieu of flowers, please consider a donation to Hospice of the Northwest (www.hospicenw.org). You may offer your condolences and share your memories of Joe to his family online at www.kernfuneralhome.com. Arrangements are through Kern Funeral Home, Mount Vernon.