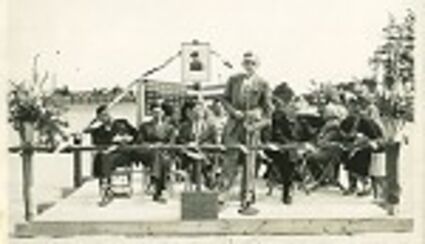 ON MEMORIAL DAY IN 1946 – This is the 74th anniversary of the dedication on Swinomish Reservation of John K. Bob Ballpark. Ronald Jensen of La Conner is at the microphone. Wilfred Steve of Tulalip, Tandy Wilbur, Sr. of Swinomish, Sebastian Williams of Tulalip, and Father Andrew McGrath are seated. – Photo courtesy of Swinomish Tribal Archive/Helen Bob Lewis Collection

Names are sacred, some more than others.

On both sides of Swinomish Channel, the name John K. Bob has been revered for more than seven decades.

Bob, who had been a popular La Conner High student from Swinomish, was a U.S. Army Medic Tech Sergeant when killed in battle in Germany near the end of World War II.

This Memorial Day marks the 74th anniversary of that 1946 dedication program, an event drawing wh...