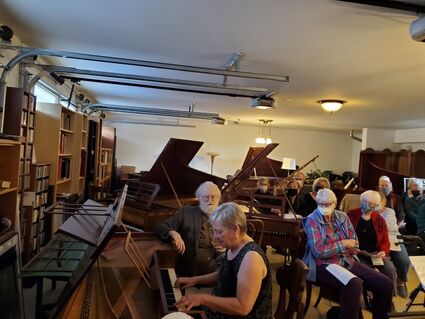 UNLOCKING HISTORY---Tamara Friedman, co-curator of the Skagit Early Keyboard Museum near La Conner, used keys on a classic John Broadwood square pianoforte to bring 19th century English history to life Saturday. Friedman, praised by the Seattle Times for the depth, wit, and humor of her performances, provided hands-on insight into historic European musical traditions during a three-hour program at the local museum.

Neither time nor distance was an issue at a local museum during an October tour.

About two dozen visitors to the Skagit Early Keyboard Museum near Snee-Oosh Beach were transported back centuries and across the Atlantic to the birthplaces of classical music.

Friedman, an acclaimed pianist, played selections from famed composers on several of the museum's original and replica instruments while Bozarth, a professor emeritus of music history at the University of Washington, shed light with insightful...