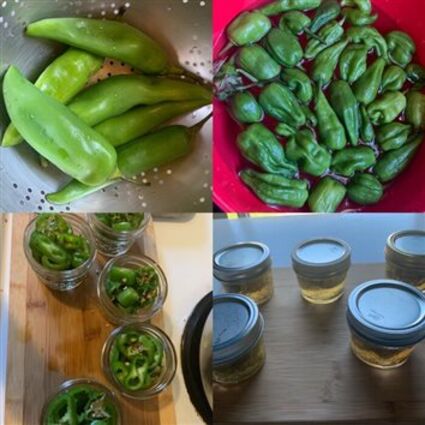 Writing up a recipe has challenges, particularly the part where I write the exact amount of an ingredient.

Often it is calculated by estimating the amount of an ingredient by visually imagining the sliced pile of hot peppers in a measuring cup.

Then I realized each canning jar I used was 4 ounces.

Then an ounces to cupsconversion has to be calculated.

Or I could describe the hot peppers by counting them.

Anaheim peppers are a mild pepper and larger than most hot peppers.

I sliced three Anaheim peppers, to start. Padron peppers are also mild but quite small.

I started with 6 Anaheims and a small carton of Padrons.

I wanted them to be equally portioned in each canning jar.

After slicing 3 Anaheims, I scooped up several Padrons, using both hands.

I started slicing until I had an equal amount of each type of pepper.

As I said, consider the challenges of writing up a recipe by estimating the measured amounts.

This recipe can be created with peppers with more heat, such as serrano and jalapeños.

To sterilize, I place the canning jars in the water bath canner and simmer on medium heat for ten minutes.

In a small saucepan, heat the vinegar, sugar and salt.

As it heats to a boil, prep the peppers.

When slicing the peppers, leave in the seeds.

Pack the jars almost to the rim.

The pickling brine must be very hot when you cover the peppers.

Fill the jars to within ¼ inch of the top.

Wipe the rim of the jar.

Attach both parts of the canning lid.

Tighten with a firm twist.

Add the jars to the water bath canner.

Be sure they are covered with one inch of water.

Begin timing once the water boils, for 15 minutes.

After 15 minutes, turn off the burner and allow the jars sit for five minutes.

Remove the jars and leave on your kitchen counter for 24 hours before labeling and storing.

The pickled peppers can be eaten right away, but are better after a few weeks.

Enjoy them on hamburgers or with baked beans, on the side.

Any brine left in the jar can be added to deviled eggs, egg salad sandwiches or salad dressings.