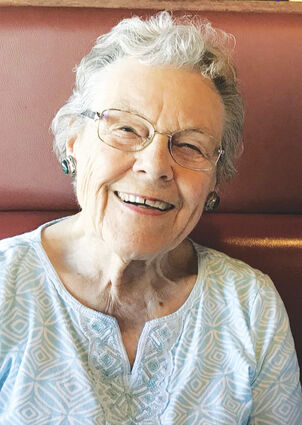 Betty May Jackman Wilson left La Conner, Washington for her next adventure on her 95th birthday, September, 23, 2022.

She was born at home in Dayton, Oregon in 1927 to May and Walter Jackman. Her family moved to McMinnville so she could attend school. They lived in the Methodist Parsonage until her father built them a house (hand digging out the basement at night after work).

Betty loved music and was always singing; she sang in the school choir, played in the band and also played piano. Later she learned the organ.

After graduating from high school Betty left for Willamette University to become a doctor. There she met her future husband, Dr. James Wilson. After graduation he went to medical school and she went to study at Columbia University with the first group of physical therapists in the United States. Betty and Jim were married on Flag Day, 1952, the day after Jim graduated from medical school. Betty spent a few years as a military wife while Jim was a flight surgeon in the Air Force. Then they lived in Portland, Oregon where Jim had a surgical residency.

They moved to Ketchikan in 1959. While raising their three daughters, Betty was active in many community groups and causes including the Methodist Church, Girl Scouts, League of Women Voters, and Ketchikan Ocean Racing Club. She was a founding member of the Ketchikan Youth Hostel and Alaskans for Drug Free Youth. She was also an avid bridge player. In later years after moving to La Conner, Washington, Betty was a member of Art League North and became an amateur watercolorist. Betty and Jim enjoyed traveling, painting and taking art classes. Throughout her life she was active in her church through Sunday School, in church leadership and youth activities. She always showed her faith in God in her love and caring for others.

Betty enjoyed traveling with the family on boat trips, skiing and sailing adventures. She was always ready for a game or a puzzle with her grandchildren.

Her family would like to thank her friends at the La Conner Retirement Inn, Hospice NW, Pastor Marcella Baker, Pamela Holmberg, her longtime friends in Ketchikan, and the " lunch bunch".