One of five Skagit Habitat for Humanity homes in Channel Cove 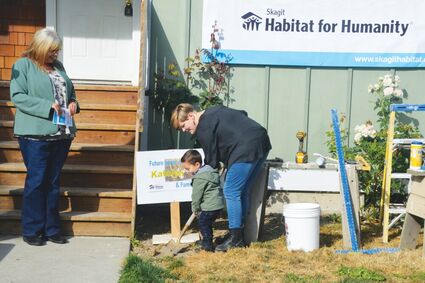 DIGGING INTO HER FUTURE – Katelyn and her son hope to move into their three-bedroom duplex before Christmas. Skagit Habitat for Humanity CEO Tina Tate, left, was master of ceremonies Saturday at Channel Cove, where Katelyn's home is one of five built by Skagit Habitat.

In a ceremony Saturday, Sept. 17, Katelyn was introduced to La Conner's Channel Cove community. By Christmas, Skagit Habitat for Humanity staff and volunteers hope to have the Park Street duplex renovated for her to move in with her two children.

While Katelyn and her young son only symbolically broke ground, turning a shovelful of dirt, Skagit Habitat staff and volunteers started renovating the three bedroom duplex in mid-August. They hope to finish their interior rebuild to allow a Dec. 17 move-in date.

In remarks, Board President Rob Ashby said the project will turn a house into a home,...