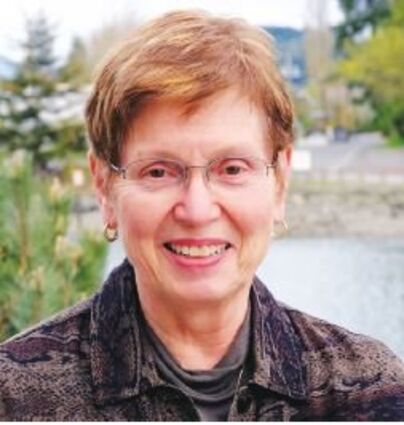 Judi Slajer passed away peacefully on April 21, 2022, with her husband Tom Rosadiuk, her daughters, and granddaughter by her side.?

Judi was born on July 29, 1941 in Grayling, MI to parents Horace Gray Sabine and Margaret Veronica Scherer. The U.S. Forest Service transferred her father to Leavenworth, WA where Gray worked as a forester and Margaret was a teacher at the local school. Judi and her big brother Robert spent their summers in the woods around Lake Wenatchee camping, winter skiing and playing in the mountains. Her father died suddenly when Judi was nine and the family moved to southern California.?

Judi attended the University of California Riverside and Ventura College, where she met her first husband, a forester, and moved with him to Ketchikan, AK in 1962. After starting as the clerk for the newly formed Ketchikan Gateway Borough, Judi was promoted to become Alaska’s first-ever woman borough manager.

After obtaining a bachelor’s degree in finance and management from the University of Alaska Fairbanks in 1982, she was a budget manager at the Municipality of Anchorage for two years, then became chief financial officer for the Fairbanks North Star Borough for twelve years. In 1997, Judi married longtime Fairbanks resident Tom Rosadiuk.?

The Alaska Municipal League honored Judi with its Outstanding Contribution Award and the Alaska Women’s Hall of Fame inducted her into its class of 2020.??Judi served on the Shelter Bay Community board of directors and numerous committees where she applied her local government skills and training to further the organization’s efficiency and effectiveness.

Giving to her community was probably Judi’s greatest joy. Therefore, in lieu of flowers please be encouraged to give to Museum of Northwest Art, at 121 S. 1st St., P.O. Box 969, La Conner, WA, 98257, or other worthy community-based organizations. A celebration of Judi’s life will be held later this summer.