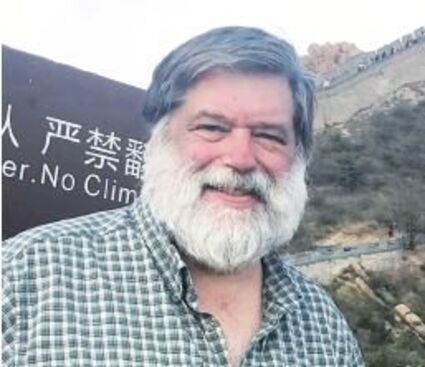 Ben grew up in Tacoma, WA, with his parents Bennett and Donna-Rue Munsey and sister Kim. He received his BA from Occidental College and his MA from Western Washington University. In his younger years, he was an avid hiker and climber, reaching the peaks of multiple mountains. His love of literature led to his opening North Fork Books in La Conner, WA, with his then wife Meg in the 1980s.

Ben was a beloved father, grandfather, friend and teacher. He was an old hippie and explorer at heart, with a deep dedication to nature, education and reading. His passion was evidenced in all aspects of his life. From taking his family camping (even in the rain), to reading his children “The Hobbit” by kerosene lamplight while living on the banks of the Skagit River in Fishtown, he lived true to himself.

Ben was unique, thoughtful and kind. After decades of teaching, he recently retired from his career as an ELA professor at Skagit Valley Community College. He also taught English for two years in China, where he made many friends and took the opportunity to travel to the North Base Camp of Mount Everest and other places that had long intrigued him.

Ben’s love of learning, reading and the outdoors will never be forgotten. To quote Bilbo Baggins, “Go back? No good at all! Go sideways? Impossible!

Go forward? Only thing to do! On we go!”

On you go, Ben, with so much love!