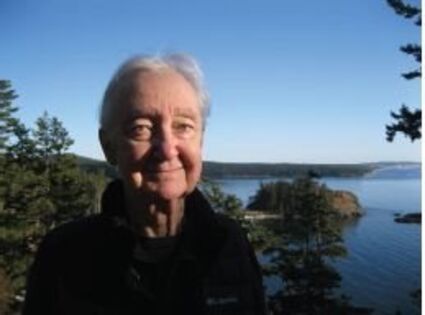 Roger Robinson passed away peacefully of kidney cancer on Jan. 7, 2022, at his home perched above Rosario Beach near Anacortes, Washington, with his wife at his side. Their children spent Christmas with them, knowing it would be the last one with all four of them together.

Roger was born on Jan. 26, 1950 in Seattle, Washington. Growing up, he spent several weeks each summer with his grandmother in Anacortes, biking around town, taking swimming lessons at Cranberry Lake on Whidbey Island and helping Wally Funk at the Anacortes American. His grandmother encouraged Roger’s artistic talent by enrolling him in art classes and introducing him to her artist friends.

When Roger was eleven, his family moved to Portland, Oregon, where his father took a new position with General Electric. Roger majored in business at Portland State University, where he met Jan Heald. They were married in 1978 at the Pilgrim Congregational Church in Anacortes, which his great-grandfather founded.

Just months after they were married, they purchased a house perched above Rosario Beach that his grandmother built, and spent weekends and holidays there. Roger’s efforts to help save South Fidalgo Island began then and continued for 40 years.

Their son Roman was born in 1986 in Portland, and six years later the family moved to a small farm southwest of Portland, where Roman raised sheep and had two pet geese, Ozzie and Harriet. Their daughter AnnaLena was born at home a few months after they moved there. After seven years the family moved to Las Vegas and then back to Portland.

For most of Roger’s career he imported fine tabletop glassware for mass markets. Often accompanied by Jan, he traveled on business to Europe and Asia, where over the years they made many lifelong friends.

Roger was first diagnosed with kidney cancer in 2002. Once Roger retired and their children were grown, he and Jan moved to Rosario Beach permanently, at Christmas 2013, into the house his grandmother built. His cancer returned in 2018, but he maintained a positive outlook throughout his illness. On Roger’s bucket list was to celebrate the 50th anniversary of his and Jan’s first date, on New Year’s Eve of 1971, which he lived to do. He died peacefully at home.

Roger’s family and many friends will remember him for his storytelling, sense of humor, candor, refinement and gratitude for his life. The world has lost a good soul, and he is greatly missed.

Preceding Roger in death were his parents Ralph and Jean (Paddock) Robinson, his brother Gregory Robinson, and three nephews.

To honor Roger’s 40-year efforts to help save South Fidalgo Island, contributions may be made in his memory to Evergreen Islands (www.evergreenislands.org).

A celebration of Roger’s life will be held in the spring. To share memories of Roger, please sign the online guestbook and bookmark this link for easy return visits: www.evanschapel.com/obituary/roger-robinson