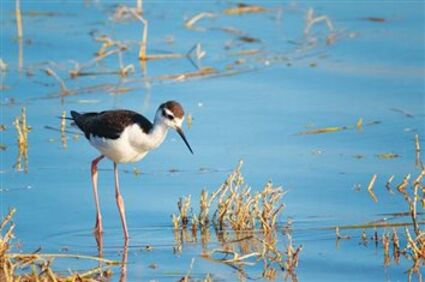 UNUSUAL VISITOR FROM EAST OF THE MOUNTAINS – It seems we always get a few unusual birds stopping by during migration season. The black-necked stilt that has been attracting birders to Hayton Reserve on Fir Island this past week is just such a bird. A shorebird that forages in wetlands and along coastlines, both along the California coast and the eastside of the Cascades, its migratory populations typically winter in the most southern parts of the U.S., southern Mexico and along the Baja California peninsula. – Photo by Nancy Crowell

I am back at the Wylie Game Range, where I take regular walks for exercise as well as to assess the changing environment.

Each time there are different animal participants.

In mid-September I was walking over the culvert road going to the wildlife parking lot and office.

There were four gadwall ducks on the left side between the two road culverts.

They acted upset and swam towards me which is unusual.

I noticed behind them an obvious line of surface ripples made by something pursuing them.

All the ducks but one flew; the last one swam within ten feet of me.

Within seconds an o...