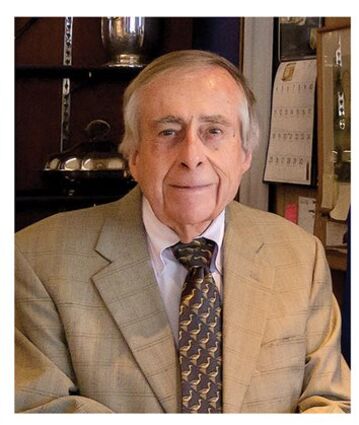 Douglas Burton, wonderful husband, father and amazing man of culture and discernment, renown local fine jeweler and life-long resident of Anacortes, passed away Wednesday morning August 4, 2021, after a brief illness. Doug was filled with the spirit of the Lord and at peace as he took this journey. His son Philip Burton was by his side every step of the way.

Doug was an amazing man of high intellect and creativity. He loved and celebrated fine literature, art, culture, gourmet food and cooking. Doug had a quiet confidence and worldly wisdom that he would share with all who he touched. Though, not affiliated with any specific church, he had a very deep Christian faith and read scripture and prayers every night. One of his favorites was 2 Corinthians Chapter 4.

His late wife Laura (Salmon) Burton was fond of saying it was amazing to watch how he saw how things could be put together, whether creating jewelry or arranging displays in the store, creating beautiful home and garden spaces or planning and taking one of their many trips. He was a true genius. She also observed that he “always had his antennae out”, collecting and perceiving information and integrating it into the richness of his life, career and world.

Doug was born November 12, 1929 in Spokane, WA and moved with his parents Phil D. Burton and Margaret (Loan) Burton to Anacortes as his father opened Burton Jewelers March 1 of 1930. He enjoyed a creative and active childhood and young adulthood in Anacortes, attended AHS and had a keen interest in chemistry and gardening at a young age. He attended SVC and achieved an associate degree.

He answered the call to serve his country and served in the Army during the Korean conflict. He forged a life-long friendship with Stanley Hamel, of NH, in basic training. He also experienced segregation while off base in Virginia while on base serving with men of all races and backgrounds. Fortunately for all, he was stationed in Trieste, what is now Italy, 1951-52. He was able to deeply experience the history and culture of Europe with his time off, his father buying him a car so he could travel around. He would return 20 years later as soon as his he could with wife and son.

He attended UW but left just short of completion of his business degree to return home to help with the store as his father had health issues.

On Labor Day of 1958 Anita (Luvera) Mayer introduced Laura Salmon, her sorority sister, to Doug knowing they would have a lot in common. After a short dating period the couple announced their engagement Dec. 3, 1958 at the grand opening of a renovated Burton Jewelers. The new store space, designed by Doug, looked like a New York showroom here in Anacortes of the time!

They were married April 4, 1959. In the fall of 1959 Phil D. Burton died unexpectedly leaving the newlyweds with the mortgage for the building renovation which was substantial. But with their creativity and energy and with the support of the community the couple grew the family business and it thrived.

Doug designed and built his own house in 1961 with a distinctive Frank Lloyd Wright feel. He added to the house carefully over the years and former Anacortes carpenter (and Mayor) Jim Rice was key in this work. Doug always said he built his retirement home in 1961, all one level!

Doug and Laura helped the early Arts (and Crafts) Festival thrive by drawing in the help of many amazing regional artists of the day including Guy Anderson and Philip McCracken. This started a lifelong relationship with these artists and the arts community.

Doug served as Anacortes Port commissioner in the late 1960’s and early 70’s for 12 years and was part of the effort to expand the Cap Sante Boat Haven and the opening of the Anacortes Airport. Even later in life he helped guide new businesses to find a home in port property.

Doug and Laura traveled extensively in the USA in their early years, driving across country twice in convertible MGs. They also traveled by train and logged over 180,000 miles on the rails much of it with young son Philip, b 1966.

Doug loved botany and the family spent many happy times hiking in the high Cascade and Rocky Mountain alpine. This being in nature imprinted Philip and gave him salvation later in life.

He took his family back to Europe, as soon as he was able, to explore northern Italy, Switzerland, France and England. He imported Italian art glass from Murano (Venice), silver and gold chain from Italy, fine dinnerware, cookware and gifts from Switzerland and England. But it was more about the experiences of travel and the relationships that were formed. Together as a couple, and with European friends, they would experience many fine meals in some of the finest 3 star restaurants in Europe and would become friends with the chef owners. These friendships endured for decades.

In the late 1970s Doug discovered the work of Bernd Munsteiner who had just hit the scene with a new and revolutionary colored gem cutting style, “sculptured” gemstones and began importing them to design and make the mountings here. This started a decades long relationship that saw Doug, Laura and Philip visit Bernd in Germany many times. This is a good example of how Doug was always on the cutting edge of design though rooted in the richness of history and tradition. It is also just one example of the amazing depth and range of professional relationships Doug formed.

Through another industry friend diamond supplier, John Keppie, Doug, Laura and Philip were able to go to South Africa in 1981 to go down into the famous Premier diamond mine and tour a diamond cutting factory in Johannesburg. Truly Doug developed a wealth of connections in the jewelry industry and all the suppliers became friends.

Doug and Laura loved to go to Salt Lake City and listen to the Mormon Tabernacle Choir and organ music, though they were not affiliated with the church. Magically they met one of the lead organists, Clay Christiansen, and remained life-long friends.

After Laura died in 2000 Doug opened a new chapter of his life writing verse and creating “books” of his remembrances of their travels with photos.

These were created with the help of Keith Eyer at How it works in Anacortes.

Throughout these publications you can really see and get a feel for Doug Burton and his deep faith runs throughout them.

Doug had a life-long love of photography and the family has a treasure of 1000s of slides and digital photographs.

This resource helped Doug create his books of memories.

It is the aim of son Philip to create another book in this tradition to celebrate Doug.

Contributions are welcome of remembrances and photos.

In the years since Laura passed Doug had some special friendships with which to share life and fine meals, just 2 of which were Kathryn Arndt and Mona Beach, among others, but he did not remarry.

Truly his home is like a library inside an art gallery inside a garden, and Doug was able to enjoy this in the years since he stopped traveling so much. He enjoyed his BMW stick shift cars and drove anywhere he wanted until the last couple of weeks.

Doug loved his daughter-in-law, Holly (Roskelley) Burton, very much, and though only got to know her since 2006, relied on her for many kinds of help and was able to connect with her in certain ways that he did not with son Philip.

He was fond of saying that throughout his life when there was a choice to be made, a crossroads, it seemed that “his choice had already been made”, “that there was a hand that guided him throughout life”.

During his final illness he observed “There is too much going apart in our world - there must be a great (more) coming together”. Doug was mentally super sharp all through his life and up to the very end.

He hoped his life would serve as an inspiration for others to accept Jesus Christ into their hearts, and to treasure, celebrate and preserve the traditions of fine classical music, literature, and art.

Doug and Philip are overwhelmingly grateful and amazed by the fantastic, caring, professional care that Doug received in his time at Virginia Mason hospital and locally at Skagit and Island Hospital. Healthcare workers careers are certainly a life calling and we appreciate and honor each and every one that we encountered and the medical community in general.

Doug’s legacy will live on in the community through all the wonderful jewelry he created and his contributions to the arts and general community. He always said, “each piece of jewelry tells a story” and all those pieces are in our community and will continue to tell their stories. The family, small though it may be, pledges to continue and enhance this legacy. Exciting and amazing things will be created to honor Doug.

On Sunday morning Aug. 8 Doug appeared to Philip in a dream. . . and he was in his best life form, about 45 years old, tan and lean and working in his garden. He said “come here, I have some things to tell you . . .” This was a great gift to Philip to see him “on the other side”.

In lieu of flowers and in remembrance you can make a contribution in the name of Douglas Burton to: Skagit Community Foundation - Douglas Burton Fund for the Arts: 1220 Memorial Highway Ste C, Mount Vernon, WA 98273.

A memorial and celebration of the life of Douglas Burton is planned on his birthday November 12, 2021. Please contact Philip Burton through Burton Jewelers for details as they come together.