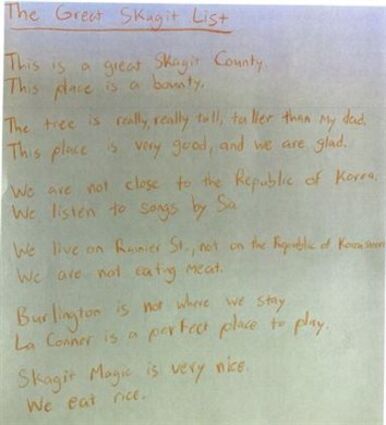 POEM WRITTEN WITH CRAYON CLAIMS FIRST PRIZE – Lenore Micka-Foos is 4-years-old and already in the Skagit County Historical Museum. Her poem, above, won first place in the first Great Hunt for Magic Skagit Stories writing contest, sponsored by the Museum. She is a role model for all of us, a wonderful observer and rhymer. – Image courtesy of Skagit County Historical Museum

Most of the poems 4-year-old Lenore Micka-Foos dictates to her dad find homes with her admiring relatives.

The first-place poem she wrote for the Great Hunt for Magic Skagit Stories will find a home in print.

Lenore’s “The Great Skagit List” was one of 61 entries in the Skagit Historical Museum’s debut writing contest. Youth, teen and adult winners in the poetry and essay categories were announced last Friday during a Facebook Live broadcast from the Museum.

“A big part of this contest was about getting people to recognize that the Museum is more than just a bunch of old stuff...